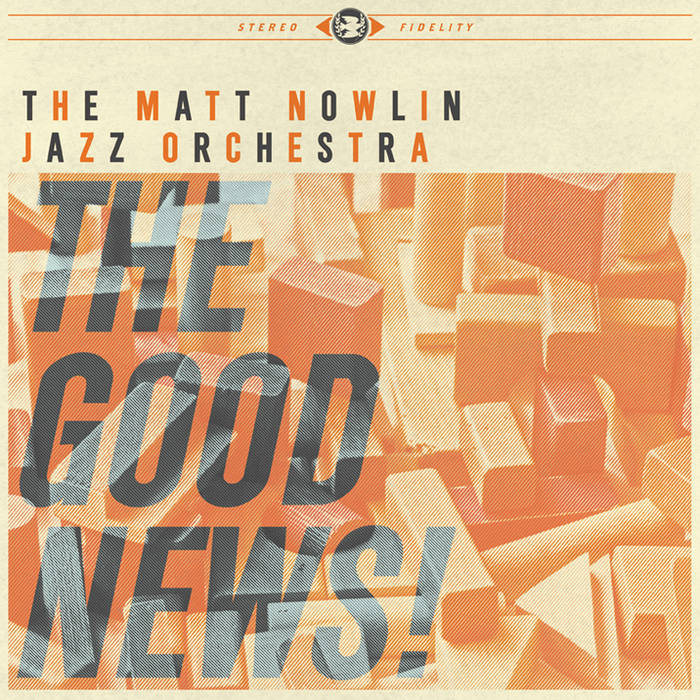 Peter Jones Tight swing like it was never out of fashion. Favorite track: Town Hall Blues.

Christian H. Salicath Everything I wanted from a swing album and more. RIch, warm and whimsical, this just sounds fantastic! Favorite track: The Good News.

Of Haven and Proxy

This debut LP from the Matt Nowlin Jazz Orchestra calls to mind Jimmie Lunceford and the arrangements of Sy Oliver, while bringing to the forefront a new voice in jazz writing. In the hands of composer Matt Nowlin, swing is a vibrant feeling rather than a bygone era.

These recordings are warm and joyful. They do not attempt to recreate an idea of what jazz used to sound like or should still sound like. They are not trying to push the edges of the music. The band just swings. The musicians on this record strive only after the deep groove beneath all early swing music. On that foundation, the Orchestra places ingenious forms, stretching harmonies and some of jazz music’s best new soloists.

Influences from the most soulful names in jazz contribute deeply to the sound of this record. The Jimmy Crawford influenced two-feel is infused with Monk and Mingus. The blues informs every piece on the LP, just as it did for the Duke and the Count. In these eight tracks the band proves that the swing sound is not a museum piece, but a living and energizing context for new compositional ideas. Above all, The Good News just feels good.

The recording of The Good News is as remarkable as its performance. The sound of the record is based on early stereo recordings of the late 1950s and 60s, including Mingus Ah Um and Basie Straight Ahead. Engineer Neal Warner has researched and emulated those recordings.

The contemporary jazz recording is made using a microphone input for every instrument. In the rhythm section, multiple microphones will often be dedicated to an instrument. Each instrument is given prominence as an individual channel and mixed with painstaking detail.

In contrast, this recording uses only four microphones. The Orchestra is gathered in the sanctuary of an early 20th century country church (now the tracking room of Farm Fresh Studios). Warner and co-engineer Alex Kroh have positioned the piano, unamplified hollow-body guitar, bass, and drum kit in front of a single RCA 77DX. The saxophones are seated to the left of the rhythm section, gathered around an RCA BK-11 ribbon microphone dating from the 1960s. The brass section, also in a slight arc around a BK-11, are arranged on the rhythm's right. These three microphones, along with a piano "spot" mike, were mixed live-to-stereo and recorded to a Studer B76 ¼” tape machine. After tracking was complete, Warner and Nowlin cut and edited the material using analog tape-splicing techniques. The resulting reel was mastered for vinyl by Roger Seibel.

The use of the stereo field in the high fidelity era was often drastic, with the saxophone section in the left channel, brass in the right, and the rhythm section in "mono" in the center. The composer was inspired to use this stereo spectrum by the recordings on Basie Straight Ahead, where the panning enhances the brass and reed interaction and creates cohesion within the ensemble. As big band music is about the orchestra as a unit rather than individual voices, this cohesion makes The Good News swing even harder.

From the first note of Just Friends, it's apparent that something different is on the turntable. The tempo has a somberness appropriate to the lyric and a deep pocket appropriate for the dance floor. This is no ballroom arrangement, however, as Ben Sampson's beautifully crafted trumpet solo extends the form, giving way to alto man Josh Johnson's stop time solo. We are left in the middle of the melody before the piece subtly fades in a variation of the earlier pedal bass.

R and B begins deceptively with slow stride-piano before emerging as an up-tempo blues. Throughout the piece, the form freely shifts between eight, twelve and sixteen bar extensions of the blues. The tune's first solo is exceptionally up-beat and succinct, played by the bright new trombonist Jake Handelman. The short trumpet statement is by Sampson. After a long crescendo, the piece softly closes with drums and piano.

Town Hall Blues is a blues in E-flat Minor written for trombonist Handelman. From the first soulful note, he proves the intention was well directed. After the melody and some ensemble work, Alex McNeilly's clarinet solo moves us into the key of A Major, where un-muted trombone brings the tune to a raucous climax. The reeds sing over the brass' variations on the introduction, eventually leaving the trombone to slip back into the original tonic (now in the major mode).

The Deeper You Go features McNeilly at his best, playing over two choruses of 12-bar blues with a six-bar bridge between. As the melody returns, its descending line takes us to the end of the side and a tasteful final chord by pianist David Linard.

Sde B begins with the fluid melody of The Good News. An exchange between brass and reeds opens to reveal the brilliant new tenor saxophonist Dustin Laurenzi. Handelman's trombone takes us seamlessly to the melody in a new key. The piece ends just as it began, transposed a major sixth higher.

The supremely simple groove of Three Up, Three Down is intermittently broken by a rhythmic reference both to the Afro-cuban 6/8 and to the "exotic" beats of early swing. Laurenzi navigates the circuitous changes gracefully, giving way to Linard's stride ending.

Swallows' Silhouette is set at a deceptively difficult tempo, and the band plays beautifully in sync. Laurenzi plays blues on either side of Sampson's melodic 32 bar solo. After the trumpet solo, the arrangement plays out in reverse, forming a palindrome.

Sleep features the masterful playing of Laurenzi and Johnson. Linard's concise solo exhibits graceful lines, rhythmic ingenuity and an expert understanding of the style. After a mock "tap-break", the melody returns and the record comes to a close.

Throughout both sides of this unique LP the band is deep in the pocket. The soloists are extraordinary, whether informed by an older style or freely reaching into new terrain. The Orchestra plays cohesively under the expert direction of composer Matt Nowlin, and the ingenious recording techniques present the group in the best possible context. Most importantly, the band clearly enjoys playing this music. The listener will undoubtedly enjoy it, too.

Recorded May 15th, 2010
at Farm Fresh Studios in Bloomington, IN.
Special thanks to Jake Belser.

*Except Just Friends written by John Klenner and Sam M. Lewis (1931) and Sleep written by Earl Burtnett and Adam Geibel (1923)

In the hands of composer Matt Nowlin, swing is not a museum piece. Nowlin proves the genre can still hold fresh ideas. The foundation of it all is that steady groove that makes swing the essential American music. Here is a humble, middle-western American diving deep into one of the world’s most important musics and coming up with a sound simple and profound, overflowing with joy and exuberance. ... more

Bandcamp Daily  your guide to the world of Bandcamp

Featured sounds by K.Spark and WIZDUMB, plus Basi joins the show to discuss his latest release.